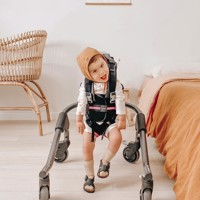 Spencer Bear was born at 27 weeks at the Royal Hospital for Women and spent his first four months in the NICU using lifesaving equipment donated by Running for Premature Babies.

Weighing just 930g, Spencer endured an eight hour surgery on his first day of life and another 100 days later. Spencer required 24 hour breathing support and monitoring throughout his entire NICU journey, benefitting from the Running for Premature Babies NAVA ventilator and monitoring system.

Spencer is now 3 and faces ongoing challenges as a result of his prematurity including cerebral palsy and eosinophilic oesophagitis. His dad Adam says, “Spencer has the most gorgeous personality, he is so resilient and strong mixed with sweet, loving and kind and then a whole lot of cheeky. He’s actually so funny too, he makes us and himself laugh all the time. He’s a soft beautiful boy who has such a toughness to him and I would definitely take away his pain if I could and strive to make life easier for him but I don’t think I would’ve wanted him to be any different than he is now, he’s absolutely perfect.”

Adam and Alice have raised thousands of dollars for our cause since they first joined our SMH Half Marathon team when Spencer was still in the NICU, and they continue to run and fundraise for us today.

Adam says, “I look forward to running for Spencer, for RFPB and for every little hero that has to fight that much harder as a result of premature birth.”